The Finnflier® originated in Finland in 2001 as the idea of a javelin fan who was an expert in  plastics manufacturing. He had the unfortunate situation of seeing a young athlete get hit with a metal-tipped spear and thought it would be possible, using his expertise in creating a wide variety of everyday objects out of plastic, to make a safe training javelin.

In Finland, you don’t have to go far to find an Olympic or World Javelin Champion – in fact, one was living nearby the factory! So a deal was made, and Tapio Korjus, the 1988 Olympic Javelin Champion, helped in the design and testing.

Three sized were created, bearing different names of famous Finnish throwers. They were sold throughout Finland and abroad.

In the summer of 2004, I happened to be at the Finnish Olympic Training Center in Kuortane as a coach. One day, a group of us went to a local department store and I bought a medium and a large Finnflier®. I wasn’t expecting much in the way of flight characteristics because I’d never seen a plastic javelin really fly like a real one.

I then realized what a special javelin this Finnflier® was. It showed the difference between good and bad flights but was safe, easy on the arm, and inexpensive. At the time I was working with USATF’s High Performance group, filming and analyzing javelin competitions. We saw that many top throwers in the US were losing up to several meters of distance due to bad flight skills.

It took me a while to understand that the Finnflier® might help these athletes, but now, it’s doing just that.

In 2009, I helped On Track, an equipment supplier, to import these javelins. They steadily gained in popularity. In 2013, I began importing them myself, and things really heated up. Schools were buying these javelins to help provide enough equipment for their athletes to practice with at a fraction of the cost of competition javelins. The coaches appreciated the safety features and the fact that the athletes were learning flight skills without hurting their arms. Another big plus was that their expensive competition javelins could be saved from  wear and tear at the hands of their beginners – no more bent tails!

In 2014, I wanted to see if the top US javelin throwers might be interested in training with these javelins to get their flight skills up. The result: the top high school and professional throwers I contacted have been training with the Finnflier®. They consistently report that it makes them be patient with their arm (a good thing) and that they really have to be accurate with their alignment. Then, switching back to their regulation weight javelins, they are finding that the flight skills transfer well.

I made a trip to the Finnflier® factory in Lapua, Finland in the end of September. My goal was to make sure the quality control was first-class and to work out some business dealings. It was great to see their setup and work on getting the system just right so the javelins are all perfectly balanced.

At the 2014 USTFCCCA convention in Phoenix, I was constantly receiving positive feedback and interest from the coaches there about how excited they were to find something that can teach their throwers good skills and save on arm strain and budgets at the same time.

For 2015, there were many exciting developments. After my Javelin Flight presentation at the November 2014 World Javelin Conference in Finland,  international attention on the Finnflier® has taken a big jump. Athletes, coaches and retailers in France, Ireland, Germany, Sweden, New Zealand, South Africa, Canada, Latvia, Cyprus and other countries have all realized this is a legitimate training tool that can help athletes learn good throwing skills. 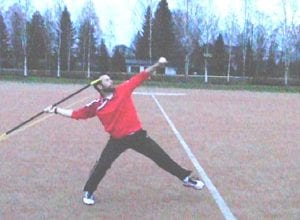 During 2016 we saw many middle and high schools use the Finnflier® in their programs for safety, economy, and flight training. My big concern about the skills learned with the Finnflier® transferring over to the 600g and 800g javelins was greatly diminished. The reports were that although the Finnflier® was challenging to throw at first, it actually seems to work to help beginning throwers learn useful javelin flight skills. The best high school throwers reported that the Finnflier® helped them with their flight skills.

2017 was the first year of the USATF 11-12 year old age groups throwing the Finnflier®, which they termed the Aerojav. I attended the National Championships in Lawrence, Kansas and was rewarded with the victory of my young thrower in his age division, setting a record (ok, it was the first year!) of 41m in the process. 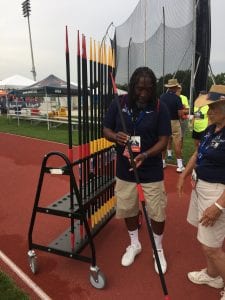 2018 continued the spreading of the Finnflier® throughout the US, with orders coming in from all over the US in age groups, middle and high schools, colleges and university programs, and Master’s athletes. Again, it appears that most people can put in the time to learn better javelin throwing with the help of the Finnflier® – the flexible shaft and reduced weight combined with the demanding flight characteristics allow enough training throws to make progress with the concepts. The trend for high level high school throwers using the Finnflier® continued with top high school throwers regularly using it.