Since I began importing the Finnflier® seven years ago, I’ve been on the receiving end of reports about how throwers are using this versatile training javelin. Middle schools, high schools, college, open and master’s athletes all seem to be able to get something out of it. My original observation was that it seemed to save the arm while enhancing the learning for making a javelin fly right, and that’s what I’ve been mostly hearing from our thousands of users over the years.

Super far throws with the Finnflier® have been reported to me over the years, with the best results I’d heard of being an 88m throw a few years ago. But things changed on Wednesday November 27th, when Michael Shuey (shoo-ee) tossed one an incredible 100m. That’s really, really far. Turns out he’d thrown a Finn 90m (296’) last year.

Shuey, currently the USA’s top male thrower at 83m, attended an NSAF javelin clinic in Birmingham, Alabama, the weekend prior. Also in attendance were the top US women throwers, last years Pan Am Games medallists Kara Winger (Gold, also 5th at Worlds) and Ariana Ince (Bronze). We also had many of the top US high school throwers, and a great group of post-collegiate athletes, all under the direction of javelin legend Tom Pukstys. Tom pulled off one of the best javelin clinics I’ve ever been to, all the way down to good weather on the main day.

Mike threw the Finnflier® about 82m in a casual session and looked…well, pretty darn good. I was impressed with his consistency and his appearance of knowing what he was doing – these weren’t lucky throws. We had some good technical discussions, and he seemed psyched about getting to hang with the other top throwers.

Then on Nov. 27th I got a video clip text message from Tom showing Mike’s big throw. I recognized it as a cousin of what I saw in Birmingham – reminiscent of the great Raymond Hecht, featuring an early “catch” of the throw for the “Reverse C”, a “Bump”, and enormous right arm elevation, internal rotation and pronation at release to produce a huge “Forward C”. Mike’s a big fellow at 6’5” 235 lbs, so this type of throwing is available to him. The elbow sleeve is a load measuring device, not injury related.

I’ve always heard of great javelin athletes throwing underweight implements really stinkin’ far, so this is no huge surprise. It can be an incredible confidence builder and teacher of what happens at very high speeds.

These two views have been synchronized to the moment of left foot landing.

I interviewed Mike and learned a few things:

So what are the takeaways for the javelin community? 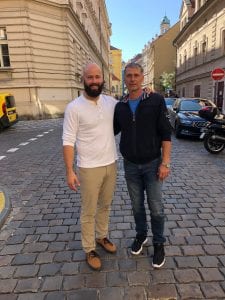 My long time friend Dr. Rich Ulm contacted me the other day to report on a very cool conversation he just had with the King of Javelin, Jan Zelezny of the Czech Republic.

Jan’s incredible career spanned three decades and has left him in possession of three Olympic Gold Medals, one Olympic Silver Medal, and an amazing World Record that holds to this day. Easily the best javelin thrower ever.

That’s Rich on the left, Jan on the right. A lovely day in Prague.

Rich was a successful hammer thrower, was a college coach and is now a chiropractor/super trainer. He was giving a lecture in Prague (yes, he’s that smart) and managed to get 45 minutes with Mr. Z. Rich and I met at the Ironwood Throws Camp over 10 years ago and have stayed in touch, sharing perspectives and information on throwing and training. And a few jokes..

As Rich filled me in on this unique meeting, he was abuzz with the thrill of hearing the remarkable insights and ideas of this true champion and artist of the event. Here are a few takeaways:

If he was feeling clear in his concepts (“I know how to throw..”), Zelezny would take as many as TEN (10) days OFF of javelin throwing before competitions. Ten (10)!!! Now, he wold do other things, including running, runup work and medicine ball throwing, but NO JAVELIN THROWING. This is very unusual!! In 45 years of doing the javelin, I’ve never heard of so much time off. Five days is the most I’ve heard of. Jan said he did this before the Olympic Games as well as other important meets. He said he needed to feel his best to throw his best. Makes sense to me.

“Important, but not more important than the other training”. He said that moving with the bar was “too limited” to have dominance over the other types of training like ball throwing and getting the runup just right.  I’ve also heard of this by way of US Olympic Team Throws Coach and former American Record Holder Tom Pukstys, who told me his sampling of the top coaches in the world agreed – in fact the consensus was it was hard but necessary to keep the top throwers OUT of the weight room. They trained hard, and trained to high levels of strength, but in modalities other than weights.

3. Short Runups in Practice Only

This idea is a perfect example of how you can’t always blindly follow what the top people do. I’ve seen college and open throwers adopt this idea, with – disastrous results!

Zelezny said he used 9 and 7 step approaches only. Well, that’s not really all that short, and his ability to accelerate was, in a word, “unusual”, as in really amazing and impressive. His best 200m time is 21.7. Not really ANY javelin throwers in the US within a second and a half of that, in my guess. So Jan’s speed at the end of 9 steps was likely high enough to have enough momentum for the throw, whereas ordinary mortals might not be able to accelerate enough to reach 6-7m/sec for a good throw.

So be careful with this one. The problems throwers encounter with short runs only in training is that they are untrained at controlling the speed achieved with the full run. They can also get the idea that all the runup is for is setting up to throw hard. This is not good. It can be a problem that many athletes confuse full runup with full SPEED runup and full EFFORT of the throw. It’s good to train the ability to do a COMPLETE runup and a relaxed, easy throw. It’s part of making sure your steps come out right.

Ok that’s the first chapter of this cool story. More to come next time.